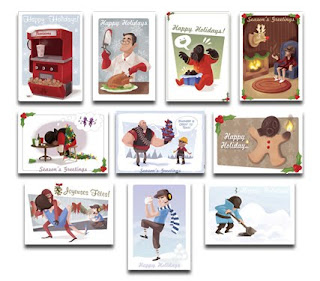 Last week, I sent out fifteen Team Fortress 2-themed holiday cards. They did not go out to family or old friends as one might expect. Instead, I sent the cards to fifteen of my fellow ATG members--only a few of whom I've met in real life. I became a part of the community/clan known as "Addiction to Gaming" or "ATG"--founded in 2009 by [ATG] Newman, [ATG] Stephen, and [ATG] Joe--back in August. I discovered the community through its TF2 servers--the 24/7 Badwater one, to be more specific. After playing there a few times, I found the overall attitude of the server and its regulars to be lots of fun, so I decided to stick around. Enticed by the all-talk key config that ATG offered on their forums, I made up my mind to introduce myself and begin posting regularly to further get to know the many, uh, interesting personalities that I had become familiar with in-game.

It wasn't long before I began to feel very much at home with everyone at Addiction to Gaming. I was welcomed quite graciously and discovered that there were many people there who had similar interests to me, even outside of Team Fortress 2 and other games like Left 4 Dead 2 and Starcraft II. After some time, ATG's self-appointed "recruitment officer", [ATG] Steak House asked me to where the clan tag in my screen name. At first, I was reluctant, as I've always been put-off by the idea of clans. But after I did, a sense of pride came over me. Not only did my playing stats improve (as is the case with most members), but I genuinely felt that I had become part of a very cool community--one that wasn't fueled by the ego-mania and bullying that I had observed of so many other clans, but rather, a simple desire to play well and have fun doing it. 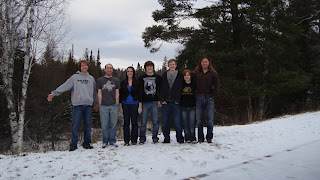 Since I became active several months ago, I have met several people from ATG in real life. In November, Steak House took me and my boyfriend, who is also part of ATG (he's known as "Geoth" online), out for dinner. A couple weeks later, Steak had a bunch of us stay at his company's lodge in Michigan for a weekend. There were seven of us, total...as pictured above, left to right: [ATG] Stephen (in our hearts, anyway), Fluffy Harmless Kitten, [ATG] wisoka, Mala, Magus, [ATG] Geoth, me ([ATG] Tobuoi or "T"), and [ATG] Steak House. And yes, we did almost exclusively address each other by our screen names. The weekend was filled with movies, Texas Hold 'Em, video games, and much more, which I will refrain from writing about for the sake of a few ATG members' dignity. Regardless, we had a lot of fun. Upon meeting everyone there, I felt as if I was simply getting together with a bunch of old friends--no feelings of awkwardness in the slightest. In fact, I even enjoyed the company of a few people better than I thought I would.

While Addiction to Gaming is largely a Team Fortress 2 clan, we play all sorts of games together and discuss all sorts of things, from movies to technology and everything in between. If you're into gaming and looking for a bunch of awesome people to share the experience with, I suggest you check us out: Addiction to Gaming. We're always looking for new members. You'll find me there as [ATG] Tobuoi.
By Tobuoi at 9:20 AM

Tobuoi
Known primarily as Tobuoi across the web, I'm an avid gamer and I not only aspire to thoroughly immerse myself in the gaming community, but to hopefully become a part of the industry as well. I am 19 years old and currently live in northern Illinois where I am going to school for game development. You can find me on Twitter and YouTube as well.